I’m soooo excited to announce that I recently won first place in the Gold Championships at SuperShag last weekend! I am even more excited that my youngest student also competed in the Youth Silver Championships and took first place too! I felt like mother hen watching her perform. She did a beautiful job! 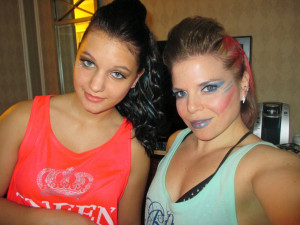 The whole weekend was quite hectic! We left early Friday morning in an attempt to beat out any traffic but weren’t so lucky.

It ended up taking us 8 hours to get to Boston; when it should of only taken 5 1/2 hours! I went up with four of my students. The trip up was quite entertaining. We got stuck in traffic on almost every major highway. At one point Ambyr and Vee needed to go pee but we were stuck in gridlock in the middle of no where. So they opted to run into the woods. Traffic was moving slow enough that I figured they could easily catch up to us after they were finished. But at that point, of course, traffic started move a little bit and I had to pull over on the shoulder to make sure I didn’t get too far ahead. As soon as I pulled over, I spotted a cop car barreling down the shoulder behind me. What are the chances? So I had to merge back into traffic, traveling even farther from the girls. I managed to pull off to the side of the road and luckily the girls caught up to us! I bet we were a half mile down the road by the time they finished! 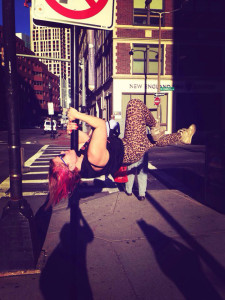 I was hoping to arrive in Boston by early afternoon, so we’d have time to walk around the city before practice but we arrived just in time for evening rush hour traffic. We checked into our room and Carmen, her mother Vicki and I went straight to rehearsals. But not before I shoulder mounted on a street pole!

After practice, we got a bite to eat then hit the hay because tomorrow would be a loooooong day!

Saturday was spent doing hair, doing my makeup, doing Carmen’s makeup, stretching and getting ready for the afternoon competition. I couldn’t wait to watch Carmen perform! She was nervous, but you would never know by the way she moved across the stage! I got back to the hotel room to finish getting changed for the evening competition. My friend Ryssa was also competing in my event. She stayed with us too on Saturday which made the hotel room even more crowded with bags, clothing and sleeping bags and makeup! We got to practice early and had plenty of time to test the poles. Everything felt good. I felt confident with my tricks and floorwork! And it was soon time to go backstage and wait for the show to begin! 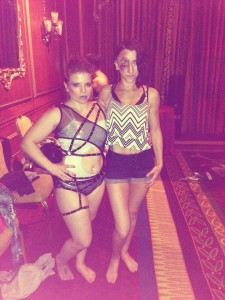 All the performers did a fantastic job! The first girl that went on stage kept slipping and got me really paranoid that the poles were going to be really slippery. So I sprayed some extra Cramers Firm Grip on. I got into my starting position on the pole, took a deep breath and waited for my song to begin. I hit every trick and move in time with the music! And I couldn’t wait to surprise the audience with my death drop. Even though my character was supposed to look serious, I was screaming for joy in my head as I nailed every damn trick!  Finally it was ready for the final combo on the spin pole. I took off into my Devil’s Elbow without my lower split grip arm and still managed to fling myself into position. All the while I’m thinking, “what the hell is going on? What are my legs doing? But I still pulled off the spin, oh cool!” I think I just came up with a new entry for the Devil’s Elbow. Woot woot! I pushed through my very last trick with all the strength I had left (which wasn’t much)! The audience roared as I took my final bow. I walked off stage screaming “Yes! Yes! Yes!” in my head. I have never felt so good about a competition piece. My friends and students met me back stage with hugs and screams of joy. It was the best feeling ever! To not only nail a routine, but to have the support of my students and friends at the competition cheering me on!

It was a long night indeed. The awards ceremony didn’t take place until after 10pm! I was so tired. But I couldn’t wait to hear who placed. As they announced 3rd and 2nd place, I knew at that moment that I had first place. I just had that feeling. And as they called out my name as the winner of Gold Championships my heart exploded! Not literally! I was just so overjoyed I could’ve cried! But I didn’t. This was the third competition that Danielle Romano judged me on this year. Pantera was also another judge. It was an honor to have them as judges and be awarded first place. I couldn’t wait to hit the sack.

The next morning we (barely) made it on the train up to Salem. We had to run, no sprint (in heels) all the way from the T Stop to the train station. Luckily it was only across the street. I saw a conductor on a train giving the ‘ok’ sign to depart and asked if this was the train to Salem. Luckily it was, and he let us on! Whew! A quick 25 minute ride and we were in beautiful Salem. I love visiting this town!

We wasted no time finding things to climb on! 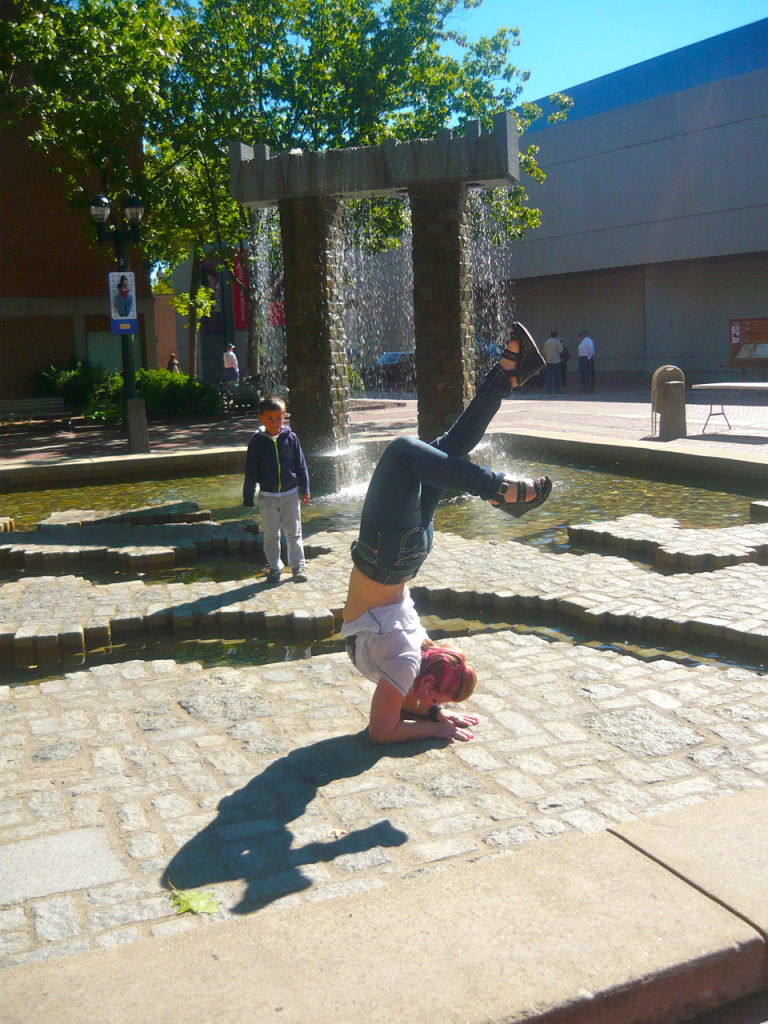 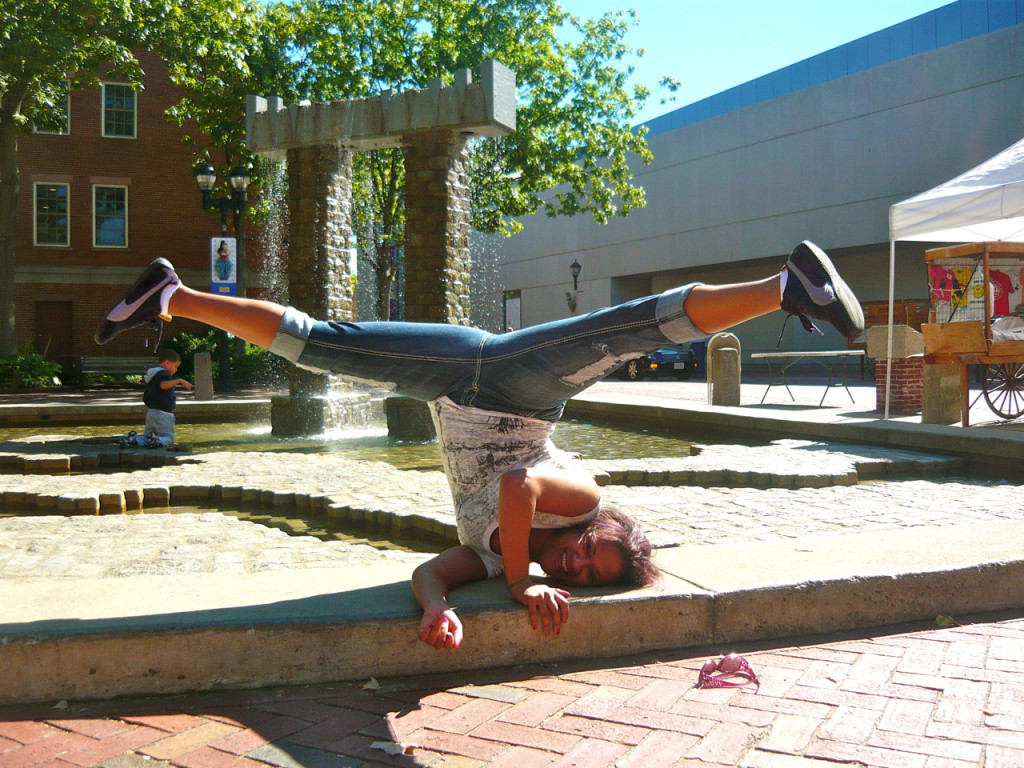 We only got to spend a few hours in Salem since some of the girls needed to be home by 10pm and it was going to be another 6 hour drive home. The whole weekend actually felt more like a work trip than a vacation. But I still had fun and I am super excited that I got to share it with my friends and students!